Root Canal treatment is a treatment that allows the infected or decayed tooth to be treated without extraction. With root canal treatment, it is ensured that the tooth is purified from decay in a painless way. 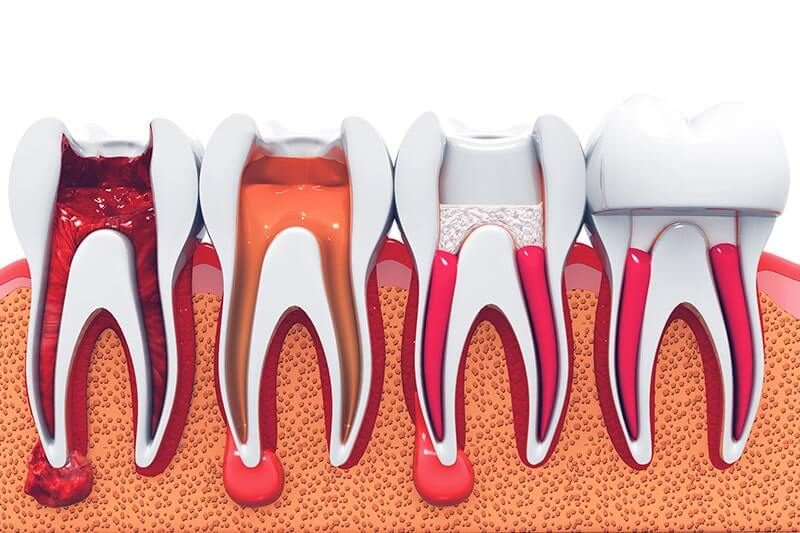 What is Root Canal Treatment?

There is the hardest enamel tissue, the slightly softer dentin tissue underneath and the softest pulp tissues. Pulp tissue consists of vessels, nerves and connective tissue and is responsible for the nourishment and development of tooth roots. Pulp has almost no healing ability and when damaged, it must be removed from the tooth. In such cases, removal of the pulp, shaping and filling of the formed cavity is called canal treatment.

In Which Situations Is Root Canal Treatment Required?

In cases where the pulp of the tooth is damaged, root canal treatment should be applied. These;

How to do Root Canal Treatment?

Nowadays, it has become possible to destroy the stubborn bacteria in the channels within a few minutes by using the laser. Studies have also confirmed that laser is more effective on bacteria living in the root canal than drugs. By using laser, treatment time can be shortened and more successful treatments can be applied.

How Many Days Does Root Canal Treatment End?

The duration of treatment may vary depending on the infection density of the tooth, the rate of splashing to the surrounding teeth and the number of root canals. In cases where the density and depth of caries is not too much, treatment is completed in one session. In case of abscess formation, antibiotic treatment may be required to dry the inflammation first. In such a case, antibiotic treatment is applied for 7 days, and then root canal treatment operation is performed.

Do We Feel Pain During The Root Canal Treatment?

Before starting the treatment, the tooth to be treated is anesthetized with anesthetic solutions and procedures to be selected according to the case. With correctly applied local anesthesia, the patient does not feel any pain, ache or pain during the procedure.

Will There Be Pain After Root Canal Treatment?

What is the Lifetime of a Teeth That Had Root Canal Treatment?

Many factors determine the life of the treated tooth. Some of those; The pre-treatment condition of the tooth, the quality of the filling and coating in the treatment, the knowledge, skill and experience of the dentist who performs oral care and treatment. A tooth with well-made canal treatment, together with good care, can serve the patient for a lifetime.

What Should Be Considered After Root Canal Treatment?

We Have Taken Our COVID-19 Measures!